How to achieve a coherent innovation policy in the Adriatic-Ionian Region?

Home/Activities, Events, News/How to achieve a coherent innovation policy in the Adriatic-Ionian Region?

How to achieve a coherent innovation policy in the Adriatic-Ionian Region?

It follows the Adriatic-Ionian Region’s Smart Specialization Strategy (3S) on blue growth and strengthens the region’s institutional capacity by building a specialized innovative community and ensures the coherence of local initiatives with the EUSAIR macro-regional strategy. The project, worth 2.44 million euros, is co-financed by the INTERREG V-B ADRION 2014-2020 program.

The Slovene partner of the project is the municipality of Izola, which thus contributes from its rich experience with European projects. On Tuesday, November 16, in Izola, the BLUEAIR project was presented at a web conference by the leading partner Science Park Area from Bazovica and project partners Technology Park Ljubljana, the Croatian Chamber of Economy and Innovation and Entrepreneurship Center Tehnopolis from Montenegro. 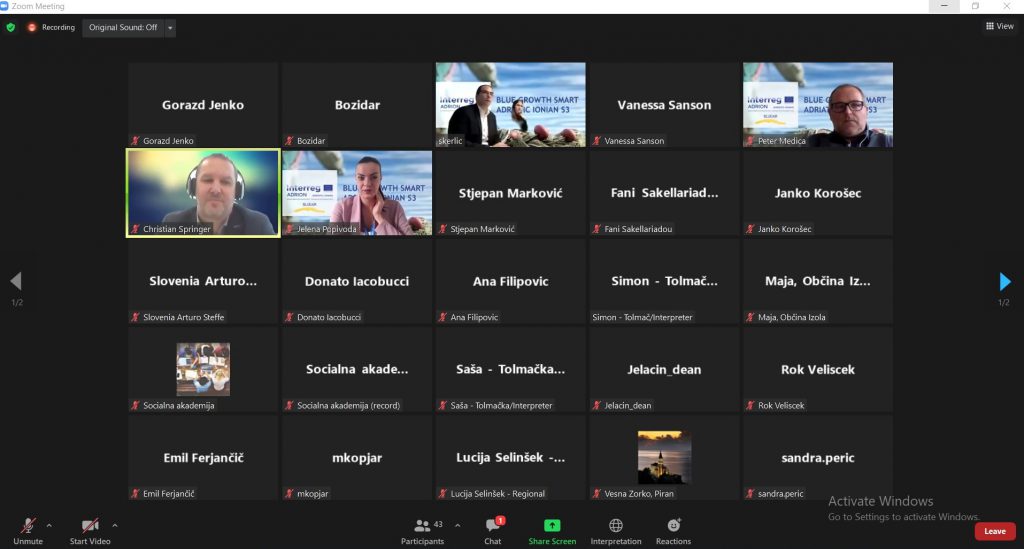 Iztok Škerlič, director of the Public Institute for Entrepreneurship Promotion and Development Projects of the Municipality of Izola, said that the project brings together many universities, chambers of commerce, scientific agencies, public administration and technological institutes, as well as the ports of Koper and Thessaloniki. “In this way, it proves in a very tangible way that the right path to innovation is really the quadruple helix of the university, industry, administration and the public,” said Škerlič.

Gorazd Jenko from the Slovene Government Office for Development and European Cohesion Policy presented the opportunities for smart specialization. The representative of the European Commission’s Directorate-General for Maritime Affairs and Fisheries, Eleni Hatziyanni, placed blue growth within the framework of European development and macro-regional policies. 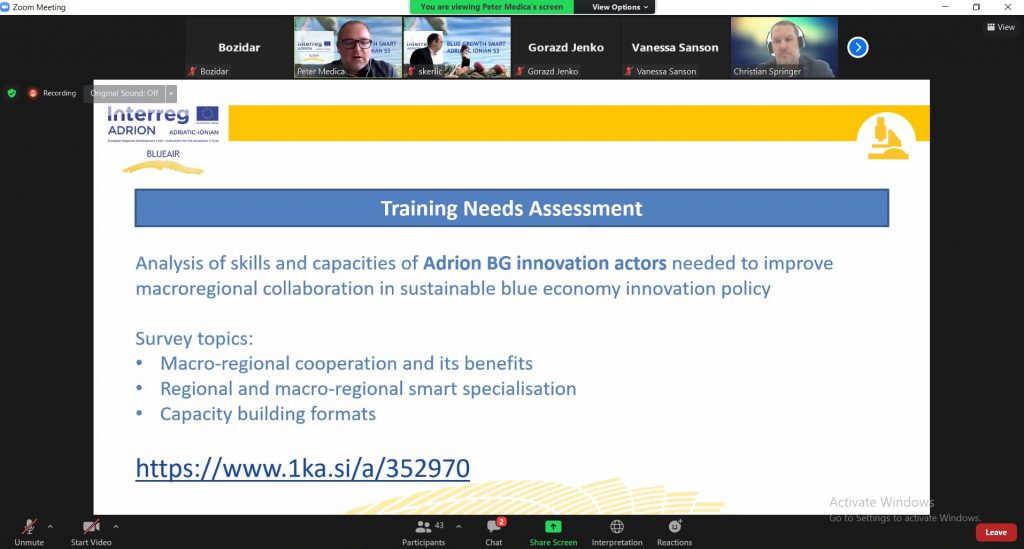 What do the partners expect from the project, which will unite them by May 2023?

Christian Springer from the Croatian Chamber of Economy answers: “We will create a strong regional innovation community, strengthen human resources and prepare an action plan for investments in the field of innovation in the Adriatic-Ionian Region.«

The results of the BLUEAIR project will be felt most concretely by people on the shores of the Adriatic and Ionian Seas in better coordination of marine surveillance and more careful management of marine ecosystems, but also in seemingly detailed but in fact fatal matters as high-sea level forecasts due to climate change. At the web conference, Matjaž Ličer from the Ministry of the Environment and Spatial Planning of Slovenia vividly described how artificial intelligence can help with these forecasts. The participants learned that “the sea level in Koper has been rising 4-5 mm a year since 1990!”

Donato Lacobucci, a professor at Marche Polytechnic University in Italy, presented possible synergies between smart specialization and the Adriatic-Ionian Region strategy. Professor at the Department of Maritime Studies at the University of Piraeus (Greece) Fani Sakellariadou presented water desalination and mariculture as two best practices that support a sustainable blue economy and Peter Medica from the Ljubljana Technology Park sees the greatest potential of the BLUEAIR project in the “strategic network of key actors in the innovation community and better coordination of joint activities.”

More information about the project is available at the link https://blueair.adrioninterreg.eu/.

You can find presentations from the event HERE.